How does it work?

Lithuanian Film Tax Incentive offers an opportunity to save up to 30% of the film production budget through a private investment scheme.

The Lithuanian Film Tax Incentive came into force in 2014, in order to create favorable conditions for filmmaking in Lithuania.

A Lithuania based business can take advantage of it by providing financial aid for filmmaking and thus reduce their taxable income and income tax.

Film production companies get financial aid for filmmaking in Lithuania if their production meets eligibility requirements and if they comply with the formal application procedure overseen by the Lithuanian Film Center.

The scheme is open all year round.

Why is it beneficial to private businesses?

Private donors in return can deduct the amount granted for the filmmaking process from their taxable income, which creates an estimated net profit of up to 11,25%.

The incentive is available for the production of: 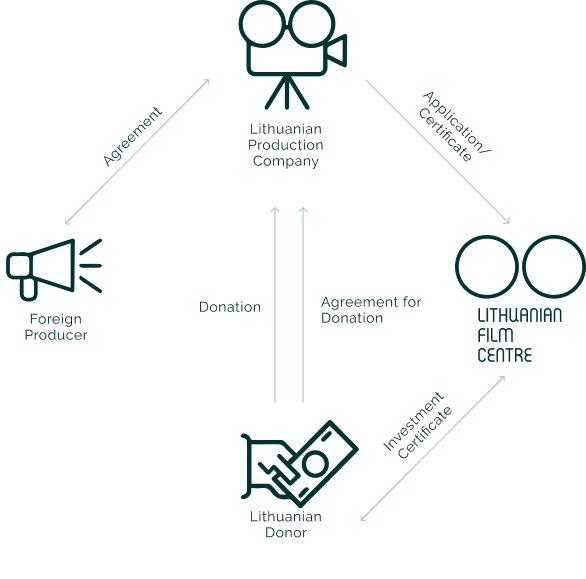 Matilda and the Spear Head

The Rise of The Nazis

I want to live

The generations of evil

Tulipani, Love, Honour and a Bicycle

The Rise of the Tudors

Hopscotch and the Christmas Tree

People We Know Are Confused

With One Eye Open

I'll stand by you

What Would Teddy Do

How I Fell in Love with a Gangster

If The Sun Will Explode

Songs for a fox

The Truth Will Out

Everything, Nothing and Something Else